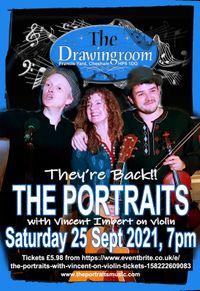 THE PORTRAITS live at the Drawingroom Chesham

Anglo-Irish Acoustic Pop duo The Portraits, aka husband and wife songwriters Lorraine and Jeremy Millington from Galway and Bristol respectively, reached no 2 on the main iTunes chart, and no 24 on the Christmas Day UK Official Charts Company Download Chart in December 2020 with their version of 'Together In Electric Dreams' featuring a locked down choir and orchestra from Somerset, UK. It was released in memory of all those lost during the pandemic of 2020 and was featured on ITV's This Morning, BBC Radio 2's Steve Wright In The Afternoon and Channel 5's Jeremy Vine, and received the backing of Stephen Fry, Midge Ure, Matt Lucas and a host of well-known figures. Returning to the Drawingroom after a two-year absence, Lorraine and Jeremy will be performing songs from throughout their career, joined on stage by long-time violinist friend, Vincent Imbert from La Rochelle, France.