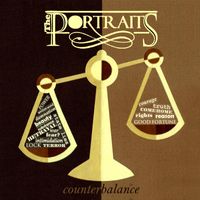 From the recording COUNTERBALANCE

“Undoubtedly, VE Day was a time to celebrate, to think back over the past and look ahead to the future. But there was, for everyone - because everyone had either lost someone themselves or knew somebody who had - a strange air of sadness to the day. That, I think, is what people remember.” Phil Carradice
Shades of Victory is the portrait of a young woman caught up in the dancing and celebrating at a VE Day street party in early May 1945. She dons a brave expression, and revels in the moment as much as the next person. She wears a painted smile but carries a heavy heart as she remembers her lost love that would never make it home. And she is not alone: on her simple terraced street adorned with colour and reproduced for all time in monotone, a dozen other young hearts have also been left broken by the injustice of a terrible and protracted conflict, mirroring the millions of lives destroyed by the futility of war before and since.

Run from home to home
To spread delirium
A battered xylophone and a dusty drum
Pounds out a call unknown
In seven summers gone:
Today is ours once again

Aren’t we the picture of good fortune!
Nothing else will ever matter again
…so they say

Aren’t we the picture…